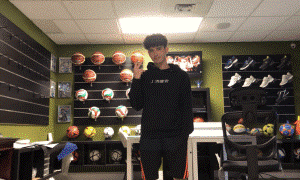 Today we’d like to introduce you to Giancarlo Caro.

Giancarlo, let’s start with your story. We’d love to hear how you got started and how the journey has been so far.

This company was actually started under another name, Indespromet Inc., over 30 years ago. The company was founded as a family business by my father, the owner, and my uncle, in the capital city of Venezuela. The company leveraged off of my grandpa’s trophy business, meaning they started selling trophies and later moved on to selling more sports-related gear such as soccer balls, shirts, and shoes at a wholesale price. Through time, as Venezuela’s economy declined through bad politics and the growing incompetence of the civilian, my family decided to move to the United States in 2008, where my father then changed the name of the business to Sports Services and settled down in a warehouse in Doral, where our office is currently located.

We’re always bombarded by how great it is to pursue your passion, etc. – but we’ve spoken with enough people to know that it’s not always easy. Overall, would you say things have been easy for you?

There has certainly been many obstacles and struggles along the way. Beginning with the company’s origin, Venezuela was once a very prosperous country for not only the citizen but also a thriving market for those looking to create something of their own. My father and my uncle took up this opportunity to create their own business. At first, sales were slow as they were entering the market for the first time. As time passed they were able to acquire clients which allowed the company to expand and acquire new employees… typically like any other company would. Unfortunately, the citizens of Venezuela elected Hugo Chavez as president and that is when the countries economy started going downhill. The government was expropriating businesses, basic necessities like toothpaste and toilet paper were becoming nonexistent, and the country’s streets themselves were becoming more and dirtier. Since the political system was corrupt, it allowed civilians the opportunity to turn to crime, and now, it is not a very good idea to step outside with your phone out because, chances are, that you are going to get robbed, not to mention also killed.

My father, obviously, did not want my family to endure these hardships so he decided to leave everything in Venezuela and move to the Miami, where the company settled down under a new name. Moving to the United States was a great move but the company still struggles because of the strong ties it has with our home country’s company, thus roads are to this day still bumpy.

So, as you know, we’re impressed with Sports Services – tell our readers more, for example, what you’re most proud of as a company and what sets you apart from others.
Sports Services specializes in the acquisition and distribution of sports-related gear at both wholesale and retail prices. We have been in the market for over 30 years selling anything ranging from trophies to tennis balls, our own brand shirts, and shoes, and are now currently getting into the business of decals as well. As a company, we are most proud of having been able to actually develop a mid-sized company. As anyone knows, just about anyone can create their own company, but to be able to acquire enough revenue through your own ideas to grow and expand your own business and become known in the Venezuelan market was an enormous milestone for the founders. In addition to having done this in the small city of Caracas, Venezuela. What really sets us apart from the other companies is our determination to make something we created into something really great. Most companies nowadays, settle for just enough because of fears of not wanting to compete with bigger businesses, but Sports Services has always competed with anything and anyone to provide the best for our clients.

So, what’s next? Any big plans?

Our current plans are to, obviously, increase sales since right now, the company is going through very rocky roads. We are now currently getting into the decal manufacturing business, so that is another aspect that had never been done before. In addition, our company is working on a new segment which will specialize in oil-based products such as motor oils and lubricants. This is a really ambitious project but if it proves successful, it might just help kickstart our business motors.

We respect your privacy and take protecting it seriously.